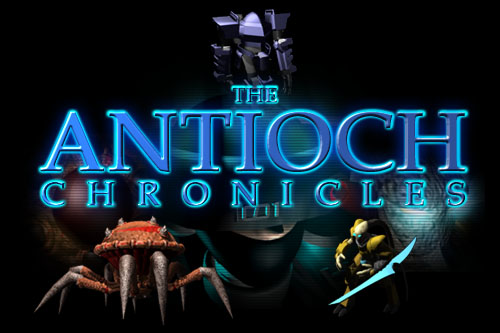 Much of the art for The Antioch Chronicles came from a guy named HoodZ. We all got to know and love him, and though he rarely showed up aside from as a name at the bottom of his pictures, he was as much a part of TAC as Auspex and Zeus.

Then this new name shows up with new and very different art in the big A3 updates: KurenaiJiku. And then we come to find out that not only is he drawing diagrams of the new A3 units, but he is doing the in-game sprites, as well! But while the sprites were never completed, what was finished, as well as the following diagrams and line drawings, remain a testament to what could have been. —Seawolf

The Secret of the Gray

Ages ago on Shakuras, a group of twelve Dark Templar made a vow that would be kept in secrecy for over three hundred years. As students of both light and dark energies, these silent warriors were among the only Dark Templar who did not physically sever their connection with the communal Protoss link. Their mental isolation from the homeworld was instead a product of rigorous psionic discipline. To what end these enigmatic beings developed their abilities, few can truly say.

From time to time, one Dark Templar in a thousand would relate an outlandish tale regarding the twelve recluses, and over the years, they became known as the Gray. The select few on Shakuras who knew of their existence described the midnight warriors as the last remnants of Aiur on Shakuras—a rare breed melding the legacies of two peoples torn by hatred and prejudice.

Before long, tales of these "Gray" Templar began referring to the swift and deadly movements of a distinctive weapon, seemingly forged in the tradition of ancient Protoss ceremonial blades like the psimitar. This long, slightly curved blade mounted on theforearm was used not only in close combat but also to channel the intense psionic energy the Gray seemed to be able to harness. Some witnesses reported that one of these "Lancers" had used the weapon as a conduit, unleashing a blast of mental energy at acurious onlooker who pressed his luck by drawing attention to the shadowy figure. The victim recovered, but could not track the Lancer, for he had vanished. Even the stealthiest of the Dark Templar found it hard to approach one of the Gray, for they seemed to be aware of any presence, concealed or otherwise. —From TAC 3 Uber Update

War is hell. In the best of scenarios, a new approach to war means a fleeting victory and a temporary sense of security; in the worst, it spells sudden death, and disgrace for those who do survive.

The Confederate Ghost program was one such new approach that successfully provided the more "gifted" dregs of society with the opportunity to serve their superiors, often in a way that others could not. The training regimen for these covert ops agents involved neural conditioning that both focused and restrained their abilities. To this end, their psionic potential was geared to augment their existing physical attributes. Psychic Dampeners were surgically implanted in these Ghosts as a precaution, but the military seldom had much trouble with its "special recruits"—their gifts were primarily used for reconaissance. Their dormant abilities still lay largely untapped.

A Different Breed of Telepath

The Kel-Morian Combine, likewise, soon realized the immense potential lurking in the minds of so many of its own psychicallytalented troops. Since the arrival of the Protoss and Zerg, Kel-Morian scientists in top secret laboratories began experimenting with variants of the Transplanar Psionic Waveform Emitter—a technology pioneered by Confederate scientists. Their goal was to determine whether the devices could be modified to no longer amplify and transmit the neural imprint of a Ghost, but rather channel this "excess psychic runoff" into a form of destructive energy. A new psionic troop was born: the combat psychic.

Whereas Ghost agents were reined in by Psychic Dampeners, these new Combine telepaths were actually encouraged to cultivate the wild and unpredictable side of their minds. Kel-Morian scientists supervising the study even went so far as to inject their patients with metabolism-boosting drugs, so that neural reactions could occur at an accelerated rate—producing more "psions" (residual psychic particles) in the process. Test subjects in the project soon began to develop an addiction to the new stims, requiring higher and higher doses to get the same effect. Due to the degenerative effects of these drugs, subject lifespans dropped dramatically. A few patients were willingly put into stasis, pending the development of more benign drugs. Meanwhile, Combine scientists finally phased in a long-awaited Psi Cannon prototype for field testing. The result: a projectile energy weapon powered by human psions.

Now seeking cost-effective methods for the deployment of these new psi-soldiers, the Combine is testing a variant of the old Lynx mining suits still in scattered use. Traditionally, the Lynx was employed in hyper-volcanic areas where even SCVs were toofragile for critical mining operations. With a liberal payload of adapted spider mines, the power suit was an ideal choice for deep core mining and defense. Now retrofitted with a neural pilot linkup and twin prototype Psi Cannons, the Lynx is finding a home on crucial Kel-Morian outposts and select science facilities throughout the Koprulu Sector. Since the Lynx's psi-pilots are jittery, trigger-happy, and short-lived as is, Combine recruiters have begun enlisting primarily female subjects to compensate for such factors. Average Lynx pilot lifespan has risen from 2.3 to 2.4 years as a result.

The second new unit for Episode III is the Terran Lynx, a ground-based support warrior with a short to medium-range attack that deals explosive damage with splash to other ground units. The exact stats are still being determined, but the unit has a very fast cooldown and the damage is respectable vs. larger units. Since its purpose is to help combat groups of larger vehicles, the Lynx is not as powerful in direct combat against masses of infantry or other small units. Its hefty complement of spider mines, however, makes it a versatile addition to any Terran's arsenal. The Lynx itself is considered an infantry unit and is produced from the Barracks, but is medium-sized and requires a few other structures to be built (currently a Machine Shop and Science Facility). More details in future updates. —From TAC 3 Uber Update

Terror from the Icy Depths

The bleak prison world of Rykos IV is home to all sorts of unsavory characters and unexpected dangers, so it's no wonder that sections of the planet have recently been infested by the Zerg. Though much of the planet is a barren wasteland, the overcrowded prison complexes teem with the vilest criminals from across the sector. The bone-chilling depths of the Great Seaof Rykos, however, also teem with a life all their own. It is from these dark arctic depths that the Leviathan was spawned.

Based on the largest species of Rykan Homarid, a gargantuan variety of the highly protective and territorial sea behemoth, the Zerg Leviathan combines elements of Ultralisk DNA with that of the mammoth reef dweller. The result is an awe-inspiring amphibian terror that strikes fear into the hearts of Terran and Protoss alike. By receiving the newest genetic information from nearby Overlords, the Leviathan is able to continue the Zerg reproductive cycle, even when far away from the hive.

New to Episode III is the Zerg Leviathan, a ground-based dreadnought or "tanker Zerg," evolved from the Ultralisk after the player develops Leviathan Aspect at the Ultralisk Cavern. The Leviathan is designed to provide heavy support for large attacking forces, but is vulnerable if caught alone or in a small group. Additional abilities also supplement its main attack. —From (you guessed) TAC 3 Uber Update

HoodZ also did a lot of concept art for The Antioch Chronicles. He not only drawn most of the characters, but he also made some bits of miscelaneous art. Here is some of it. —Erasculio

Before the death of The Antioch Chronicles, Episode III, Auspex Studios released many little previews for the campaign, including two wallpapers. They were released in the so-called Über Updates, and were motiffs of discussion in the Forum for months. —Erasculio