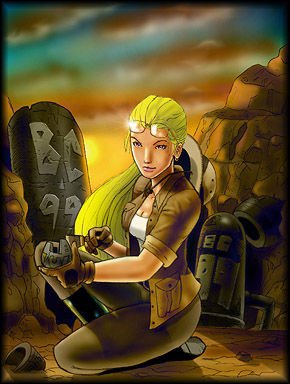 Born on the scorching desert world of Sikarra, Haley Rourke was raised solely by her father. Spurred by tales of his youthful adventures, she yearned to experience her own, and dreamed of a life beyond her quaint surroundings. Unable to afford to send her off-world, Haley's father instead sent her to college, where she sought out other ways to escape the boredom of rolling sand dunes and insectoid wildlife. In her studies, Haley found a keen interest and excelled in the fields of archaeology and paleontology. Graduating early, she unexpectedly fell in love and married, despite her father's wishes. Now divorced, Haley takes care of her aging father and helps him with the family business.

"Behind the grit and tarnish you can usually find something worthwhile... after a little spit and polish, that is."

Little is known about the early days of Professor Harley Rourke before his disappearance ten years ago at the end of the Guild Wars. What few records remain from that period report that the professor was once a celebrated historian, archaeologist and explorer. After his wife was killed by Confederate troops at the Battle of Venado Bay, the once jovial and outgoing scholar became a bitter recluse, abandoning his tenure at Kelanis University Sikarra and vanishing into the wastelands with his two children. Over the years, rumored sightings of the professor found him in the company of various anti-Confederate factions such as the Sons of Korhal and the Brotherhood. Recently, however, he and his daughter have resurfaced on their desert homeworld as proprietors of a junk recycling and mining equipment shop.

"Get that recorder outta my face before I beat ya with it, ya punk!"

As a young man, Kurt Broker served in the Kelanis Guild during the Guild Wars, a decade before the destruction of the Chau Sara Colony. Instilled with an obsessive hatred for the Confederacy, Broker worked toward achieving his revenge by rising in the ranks until he could exert political influence in the newly established Kel-Morian Combine. Appalled by the Combine's seeming submission to Confederate tyranny and their willingness to do business with them, he slowly began turning other Guild War survivors, their friends and relatives to his own secret political agenda, and began sabotaging the operations of his rivals through espionage, assassination and blackmail. Broker has since risen to become the head of his own criminal empire, with connections throughout the Koprulu Sector. Where he once craved revenge, he now thirsts for total domination.

The Zerg Cerebrate Zethys was sent by the Overmind to Chau Sara shortly before the Protoss incinerated the planet. He never arrived. As he and his brood entered the Koprulu Sector, they were engaged by a routine patrol of Kel-Morian forces, and Zethys was captured. Kel-Morian scientists, intrigued by this new lifeform, conducted mutagenic experiments on the Cerebrate, which severed his psychic link with the Overmind and drove him mad. Whatever his personality might have been like before, Zethys now finds himself completely unhinged, exhibiting extreme cruelty, bizarre fits of insane laughter and an obsessive desire to see other lifeforms suffer.

"He obviously suffered from psychic trauma. I helped ease his pain." (Zethys speaking to Dr. Manfred Isenberg after having removed a fellow prisoner's brain)