Auric Skyreaver was a Starcraft campaign–making globe-trotting self-aggrandizing Australian lawyer dude who only stuck around long enough to piss everyone off. He announced his intentions to finish Antioch 3 about fifty years after the last person stopped caring. His credibility was...slightly dubious.

He was never banned; everyone just scared him off.

Some quotes about the legendary Mr. Skyreaver:

"SHUT YOUR FACE AURIC, MY MOMMY SAYS I'M THE MOST HANDSOMEST BOY AT SCHOOL, YOU JUST SHUT YOUR FACE!!!!11" —Freh 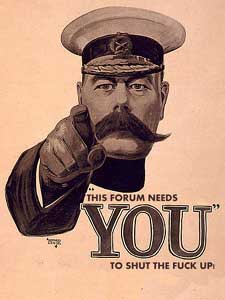 "The sad thing is, he still sucks less than Mason." —Magnum