"En Taro Adun," Turmalis said. He turned and walked down the hallway to his personal chambers.

When they were alone, Khrillian turned to Moloch. "Was it proper to burden him with this?" he asked.

Moloch nodded solemnly. "Perhaps not. But it was necessary. Turmalis is wise, but his is not a questioning soul. Perhaps this may open his eyes."

Khrillian sighed. "Or perhaps it may close them — forever."

Moloch snorted. "Regardless, we must do what we can."

"Moloch, I am not even certain I believe in Laurioch's dark prophecy. For all we know, it was simply a hallucination induced by his melding with Aldaris, who was likely sufferring a mental breakdown from the atrocity he experienced at Teross. Quite a common occurence with the handful of survivors that I was fortunate enough to escape with. That was three hundred years ago and nothing has come of it since that time," Khrillian replied apprehensively.

"If you were so certain that it was nothing more than the ravings of a lunatic, you would not have lied to the Judicator. You have read the Prophecy and you know as well as I that Laurioch himself believed it to be true, until his passage from this universe into the next," Moloch chided. "I understand your fear but we cannot run from the darkness or wait for you to find your faith in that which cannot be seen. The Zerg are like no enemy we have ever faced. Our race teeters on the edge of extinction. I have witnessed events that lead me to believe the Prophecy is real, and that it is coming for us." His words echoed in the hallway for a moment, and then he turned, his cloak swirling behind him like an angry beast reaching out to snap at Khrillian as he stalked down the hallway.

Khrillian stood there for a moment, confused and afraid, and after a few moments of deliberation he decided he would consult Laurioch's journal — just in case.

The Prophecy of the Baphomet 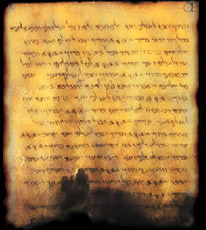 I was in utter darkness, free of the flesh that houses my spirit. The stars flickered into existence to form a galaxy not my own. I saw there two great serpents coiled about each other, constricting and snapping at each other. I saw one sink its fangs into the other, and the wounded one fled. I then saw my homeworld of Aiur, peaceful with a beauty I have never witnessed. My corporeal form soared down through the clouds and across the oceans and continents, and I was content.

Then the clouds darkened and I saw a female demon with an army of shadows fill the skies. Death rained down from above and I saw my people dying to the point of extinction.

I could not bear to watch any longer and turned away, but could not close my eyes. I saw a dark world I recognized, and beneath it a chained silver beast begged me to free it. It promised me things in return for its freedom but I desired none of them. It roared its rage and the ground shook violently and its bindings strained and screamed against its power, but held in place.

I saw Adun standing there with the spirits of the Xel'Naga, and they gave me a sign that I had done well not to give in to the great Beast's promises. He placed two sentries there to guard the Beast and vanished. I tried to call out to him but he was no longer there. I saw the sentries become corrupted by the Beast but they could not free it.

Then I was on Aiur again, and saw Sevorak digging into the ground. He turned to face me and I saw he had been corrupted as well. "Beware the Baafo'Met," he said to me, and then his flesh crumbled away leaving only bone and wicked laughter.

I saw others, faces of beings I recognized and others I did not, flash before my eyes. I watched in horror as they all became infected by the evil and finally let loose the great Beast, its bonds snapping with the sound of a thunderstrike.

It swallowed them whole and then began to feast on the planets and finally the stars themselves. One by one they flickered and vanished until I was once again plunged into darkness... but this time I was not alone, for the Beast was there with me, savoring me for last.

I have come to understand what this prophecy foretells. I know what the Beast is, and its purpose. I alone know what it is capable of. I must prepare myself and future generations to guard against the cataclysmic onslaught that lies in the mists of my future.

I shall gather together a — [text unreadable...]