Dekar is that guy, the one who does the stuff. He's pretty awesome.

Story of an Awesome Guy

Hey, look, I haven't updated this in almost 4 months, rock on.

Well, I took my last finals for my Junior year today. I'm done. Only one more year till college. It's kind of sad because quite a few of my friends are leaving and a lot of my friends this year were graduating seniors, but eh, it happens. As far as this summer goes, I'll probably just be working for most of it. I got a job at Universal Studios as the coolest ice cream stand guy ever. So if you're ever there and you visit an ice cream place with "Pharmacy" in the name, that's totally my territory.

Jason, otherwise known as Beejasmorl, donated his old GeForce4 Ti 4600 that just needed a new fan to me. I we went out and got a new fan for it on Saturday and stuck it in here; works like a charm. Ahh, the beauty of a video card that doesn't suck ass. I went out and got Resident Evil: Outbreak while I was at it, it's pretty fun. I also pre-ordered Halo 2 for shits and giggles. Things have been pretty busy lately, but now that school is over they'll probably slow to a halt for awhile.

This page is getting pretty long so I should probably start cutting the entries. I think I'll get on that tomorrow. Because clearly the crowds demand action.

You know what I want to know? I want to know where the fuck my video card is. I ordered it Thursday, April 8th, next day delivery, I paid 18 dollars shipping and it's coming from the goddamn U.S. Even though I picked next day, they said it usually takes 3-6 days to ship it. Well, okay, whatever, that's RETARDED, but I can live with it. Now, see, It's been three weeks and they haven't even fucking put it in the mail yet. They validated the credit card the day after I ordered it. If you count business days since they validated the credit card it's been 9. There's like no excuse at all. NO ONE BUY COMPUSA. BOYCOTT THEIR ASS.

I'M GOING TO FUCKING KILL THEM ALL AND PAY HOBOS TO HAVE SEX WITH THEIR CORPSES.

Happy birthday to me. Someday I will make 3/11 a national holiday and children will remember it as the day they got out of school for Spring Break.

I was sitting at school today when divine inspiration hit me. Now, I could add in that trite bit in which I depict a scene wherein it literally nails me in the head, but that would just make us all die a little inside. So I won't.

So I was sitting there, and I was thinking, "Why should my band waste all our musical talent with any normal band that's never going to gain anyone's attention. We clearly need something bigger..."

It all came to me, my band would have to be an emo band. No one would ever expect it; a bunch of sub-urban high school students forming an emo band? It's a totally new concept. We'd call ourselves the Girl Scouts. Now that's emocore. I even thought up our little band symbol, it would be a man wearing a girl scout uniform holding a guitar.

As a back-up, in case the actual girl scouts organization tried to give us legal trouble, we could always change our band name to the Crying Ninnies, or even the Screaming Pansies.

Yep, I've got this rockstar thing down.

Hey there, it's time for my like monthly update or something. You know, lately I haven't been keeping up with music like I used to, my playlist is getting a little stale. I really need to find some new music and bands to spice it up.

There isn't much up lately, really. I got Crystal Chronicles when it came out. It's an okay game, a little too easy, though. Also, playing it 4 player is choas; having to haul the chalice around gets old and you are a little limited in space when you have 4 people running around. Limited being an understatement.

Spring break is soon. It actually starts the day after my birthday, which is 3/11 in case you cared to know, but didn't feel like scrolling up. I hope the weather is warm by then, then maybe me and some friends could get out to the beach for the break. I could use a nice stay at the beach right about now. I really need to sign up for the SAT, too. Considering I was planning on taking the test in March. I need to get my community service hours racked up, too. I don't want to have to mess with all this stuff and get stressed my senior year. My brother waited till the last minute to do everything and he still has no clue what college he's going to. He got accepted everywhere he applied, though, which is cool. Hopefully I'll be as lucky.

Wooh, new update. So yeah, I went over to my friend Jason's house and parked my car and went inside. And like 5 minutes someone knocks on his door and he answers it and then he's like "Hey, uh, Brendan, I guess this guy needs to talk to you."So I go to the door and the guy is like, "Uh, I backened into your car." First thing I said was, "Seriously?", considering a guy hitting a parked car seemed really stupid. So yeah, he had backed into my car with his dodge ram and busted in my door and broke my window. We got his insurance and then had to clean up our glass and everything. It was great. 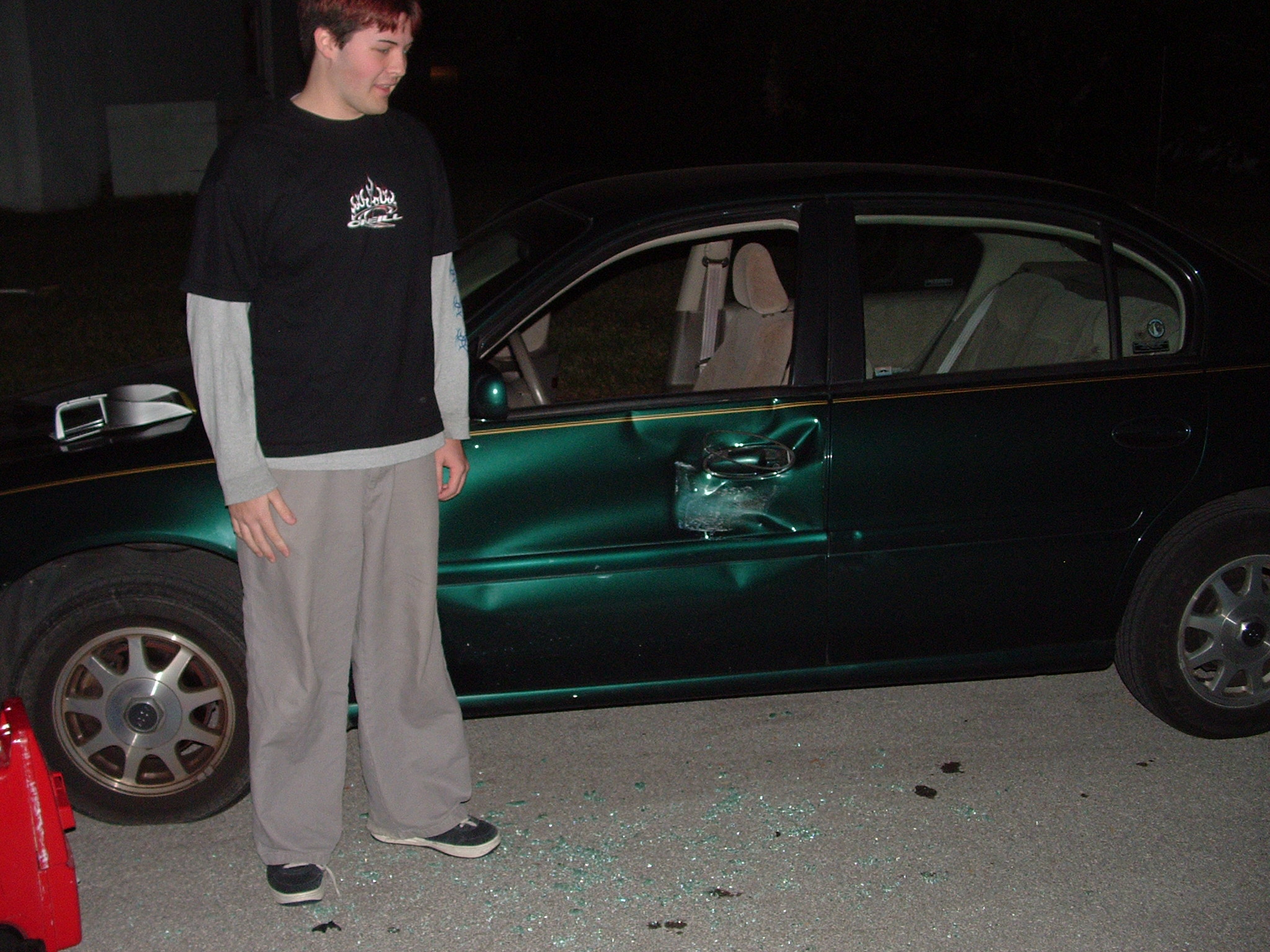 Those are both photos taken after the car was cleaned up, of course. On an unrelated note:

Hey, I haven't added anything in awhile, miss me? *crickets* You know you do.

So, yeah, anyway. Homecoming turned out great. I went out with some friend and we got dinner at the Olive Garden before the dance and it was pretty awesome. Then we went to the dance and screwed around and then we all saw a movie and checked out a party. It was pretty dead by the time we got there, though, so we didn't stay long. All in all, it was a pretty cool night. I didn't get home till like 3:00.

Other than that, my week's been pretty typical. Though we're having some crazy whether down here due to something blowing in from the Caribbean. It's raining and everything, like summer all over again. Only, you know, it's November.

Okay, scratch that, I'm actually glad I didn't end up going to Homecoming with who I was going to go with. That sure wouldn't have been fun.

So yeah, I procrastinate as much as humanly possible, and don't get myself involved in extra work if I can avoid it. So somehow, when I got screwed into having to design and build an instrument from scratch, you can imagine my surprise and dismay. Only I kind of screwed myself over.

See, I was in my Algebra II class, and we were done with all our stuff and had 10 extra minutes like we always do so I moved to the other side of the room to socialize. And so then I was talking to my friend Lisa and out of the blue she told me about some science thing she was going to after school and she told me I should do it to and it was fun and she didn't want to have to go there and hang out with the other people, etc. So I was like, yeah, sure. I figured, hey, if I don't like it I can always just not show up next time, it's not like I'm signing up. Little did I know, it was exactly like that, and I did end up signing up.

So now I'm supposed to build and design an instrument from scratch that can perform an entire C5 major scale, which is fun.

That was last week and I was supposed to have the design and materials ready this Tuesday, and I didn't of course. So I just told the teacher that I will just get the stuff myself and give her the receipts and she can pay me back because I need to play around with a design and pick out the supplies on my own. Which worked. I think I found some people who can help me out with the actual construction, which is the real bitch, so I should be fine if I can just get the design figured out.

On a side note, it's homecoming week and homecoming is this Saturday. I'm going stag again, good times. I'm not going with anyone mainly because I only really wanted to go with one person, but eh, I'm a ninny so I didn't ask in time and she got another date.

I'm sure you're thinking to yourself, "But Dekar, acting like a ninny? This can't be! He is awesome!" But yes, I admit to it: I was, in fact, a ninny.