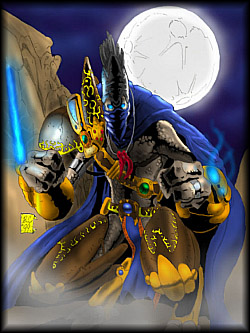 Moloch was one of Zeratul's ilk who arrived with him on Aiur just before the trial of Tassadar. A former student of the Templars Nannoth and Taeradun, Moloch had meditated long on the ancient teachings of Khas and Adun, but ultimately had been driven to sever himself from the communal link, joining the wayward bands of Dark Templar who had long since fled Aiur. His return to the Protoss homeworld held both the promise of redemption and the threat of damnation. With Zeratul attending to larger matters, Moloch was ordered to seek out a growing disturbance near the temple grounds at Antioch, where Fenix had fallen.

"Each battle is simply a struggle for survival. There is no honor or glory to be won in it. There is only the hollow victory of choosing who shall live and who shall die THIS time." 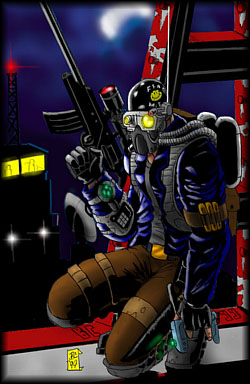 Not much is known about the man named Trent Aster, if that's even his real name. Living in the shadows of half-abandoned fringe worlds, preying on the seedy backstreet commerce of the darkest dregs of Terran society, Aster plies the age-old trade of misdirection and motive, hunches and hard proof. A specialist in the retrieval of highly sensitive classified information, Aster has been known to frequent the rougher zones of major spaceports, known to contacts in the area as the man named "Trench", for any who might seek to employ his considerable talents. While it was once rumored that he worked for the Umojan Protectorate under Minister Jorgensen, most streetwise cads would probably point anyone mentioning the name "Trench" in the direction of Korhal or the Tornod system.

"Yeah, ramble on about how tough you are, boy. Most people don't see the bullet that hits 'em in the back of the head."

Ian Anduin lived in the Tornod Highlands for most of his adolescent life, where he learned to tinker with the new technology that freighters, cargo vessels and off-world transports often deposited in nearby outposts as either trade surplus or mission refuse. When the Zerg overran Tornod III, Anduin helped his people fend off the rampaging creatures until a division of Mengsk's forces retook the planet — an act that earned him the position of Marshal of the Highlands. Now under Dominion control, the major civilized centers on Tornod III have evolved into a network of corrupt city-states driven by rampant bribery and mutual economic and political back-scratching... leaving Anduin's idyllic highland home an easy target for thieves and well-armed pirates.

"Every man dies. Not every man truly keeps down his beer."

Mason Rockwell was a highly sought-after artillery specialist who had been stationed on the planet Moria for most of his early career. Now settling into his prime, "The General" has decided to have a go at it in the mercenary field, offering his services (and inflated ego) to the highest bidder. Rockwell's command style and combat tactics are distinctive, to say the least — many a superior officer has instantly recognized the blaring music pumping from within his modified siege tank, even across an entire battlefield in the heat of combat. His cocky demeanor belies a serious strength of mind and resolve that always carries him through to the end of his assigned task. For Mason Rockwell, failure is not an option, and personal embarrassment amounts to nothing short of sacrilege.

"YOU want to lock horns with The Great One?"

Khrillian had always cultivated a deep understanding of the ancient Protoss texts. Steeped in the extensive lore of Aiur's history, the warrior honed not only his body in battle, but also his mind in the pursuit of knowledge. The sole custodian of his predecessor's journals, Khrillian had spent many long hours studying in the archives on his former homeworld. Also an accomplished pilot in his own right, Khrillian eventually earned the leadership of an entire air division as a member of Zeratul's personal guard. Khrillian's small but mobile fleet is among the deadliest on the dark world of Shakuras.

"History has been recorded for a purpose. Be mindful of what has come before, that it may guide you toward what is to be."