"The Conclave sentences you, Ghettok, to death for being a fly mother," a Judicator declared.

"I OBJECT!" exclaimed a Protoss from the back of the hall.

"Who is that? And why does no one feel the need to stop him," another Judicator pondered.

"I am Johnnycochranatul! This Protoss has been bamboozled by this council and I demand a retrial! If the Psi Blade fits you must acquit!" the fiery Protoss argued.

"He is strangley convincing.... but being strangely convincing is heresy!" a counselman stood, "SEIZE AND DESTROY HIM!"

Within an instant, Johnnycochranatul was stabbed and beaten severely, then dragged off. "Now for you, Ghettok, you are banished to Shakuras! Go away!"

The Felix was a light-hearted take on the Starcraft campaign business, which helped take some of the edge off the utter impossibility of an inch of it ever getting released. It had a pretty funny web site, though. It was devised by Lucainan and also featured the talents of Mike Lemmer, Codebreaker, Lucid Iguana, and some other dudes.

Its name was a play on The Fenix, a Desler campaign that, equally disappointingly, was released. 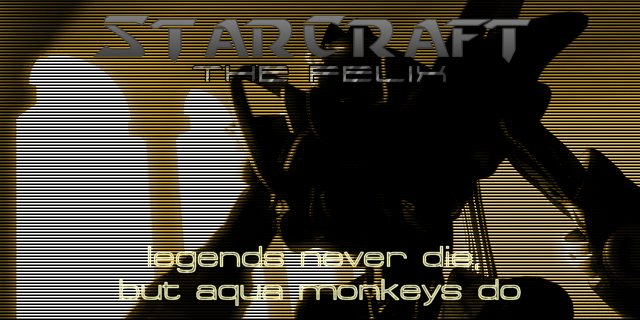 Find out more at The Felix's web site.