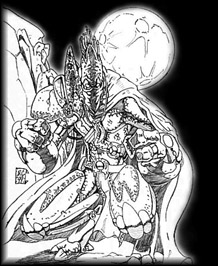 The Protoss shuttle descended through the skies of Aiur, landing on a makeshift platform deep in the planet's jungles.

The first to step out into the sunlight was the Dark Templar Prelate, Zeratul, followed by his bodyguards Moloch and Khalabak. They were greeted by the Terran named Jim Raynor and the Protoss Templar Tassadar. Moloch eyed them warily for subterfuge or a glint of betrayal, but saw nothing threatening.

Raynor smiled a lot, and Moloch found it unsettling. He trusted no one. Especially smiling Terrans. But Raynor was different, he supposed. Few earned the respect of Zeratul, and Raynor was on that short list. That in itself, Moloch thought, spoke volumes in regards to the Terran's character.

But he would watch him nonetheless.

And kill him if necessary.

It was nightfall on Aiur when Khalabak burst into Moloch's quarters and gave him the news.

"Moloch. Zeratul and his allies have ordered an attack on the Conclave!"

Moloch let the information sink in before answering.

"I am uncertain. The Prelate has asked for your presence, Moloch. Perhaps he wishes you to aid in leading the attack, my friend," Khalabak said proudly.

A vision of slaughtered Elders conjured itself in Moloch's mind briefly, only to be replaced with a crimson nightmare from the past that brought him back to reality.

Moloch stood in the doorway to Zeratul's quarters. "You called for me, Prelate?"

Zeratul turned from the window and sat down behind his console, motioning for the warrior to be seated as well.

"Moloch, I must tell you of something that is to be kept in strict confidence."

The Dark Templar nodded that he understood, and listened carefully.

"Shortly after we arrived here on Aiur I sensed a powerful disturbance of psionic energies. Dark energies such as we possess, but somehow... tainted. Concentrate, and you can sense it too... a thrumming in the back of your mind. This disturbance is somehow familiar to me, and yet I cannot place it. There are no other Dark Templar on Aiur beyond those you are already aware of. Tomorrow we attack the Conclave. We cannot afford to let some new threat assail us in the midst of this battle. We are short-handed as it is."

The Prelate paused and pointed to Moloch.

"I want you to investigate," he said. "You may choose whom to take with you but we can only spare a handful of warriors to aid you. You will have no reinforcements, no transportation and no way around a total communication blackout. This cannot be helped. Find out what this thing is, and if it is a threat, eliminate it, if you can. Do not engage if you are not certain of a kill — do you understand?"

"Yes," Moloch replied. He understood, all right. He understood he was being denied his vengeance on the Conclave. 'So be it,' he thought angrily. 'If I am denied my right to this battle, for which I have waited centuries, then I will hunt down whatever it is that emits these negative energies, and unleash my fury on it instead.'

"If you are outnumbered, or it is too powerful, then I want you to report back to me. Do not risk your life or the lives of your brethren needlessly," Zeratul added.

"As you wish, Prelate," Moloch replied, his rage seething inside him.

"Go now and choose your warriors. You leave at dawn."