Notice: Redirected from The Star Alliance. 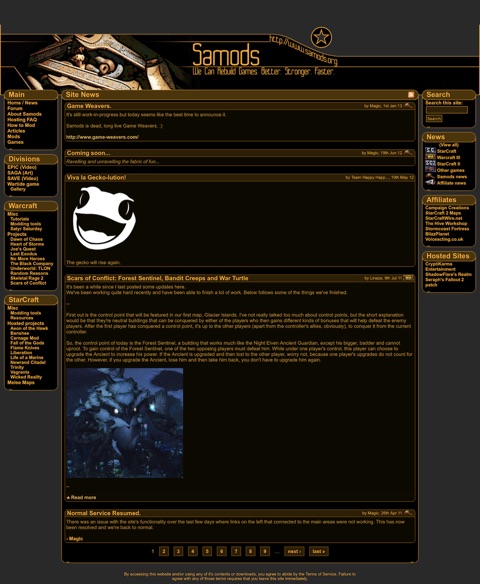 Samods was a Starcraft and Warcraft III custom campaign and modding site, similar in spirit to Campaign Creations. It was founded and managed by Magic; a number of people from the Antioch and CC communities were also involved with Samods in some capacity. It was originally known as the Star Alliance but was renamed in late 2007:

"The Star Alliance" was thought up many years ago now (over ten I think!) when I was brainstorming a name for a "StarCraft level making group", I believe I was inspired by the Lost Souls Alliance from the adventure game Grim Fandango and also Jagged Alliance, the game series where I took my nickname from. These days, however, I believe it's no longer appropriate—I can recall a few occasions when people did not instantly understand the purpose of the site and were thus put off, and so I felt like our name should contain at least one word related to what we're all about: modding.

Though it has been dead since approximately forever, it lives on (in a fashion) on the Wayback Machine.