Another Day, Another Dollar

Join the city's number one "data retrieval specialist" as he makes his way through the bowels of the city and beyond.

(Sketches by HoodZ and Auspex Turmalis.) 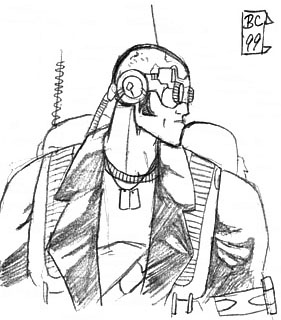 "Another early morning. Outta stims. Son of a bitch got away last night. Ro'taann is going to be pissed. The guy blew up three of his supply depots with a handful of mines. Specially modified. Ridiculously bloody. Yeah, I failed to mention the drunk guy who was in the way.

"Dammit. Bar ain't open yet. I wanted to talk to the bikers about the next time they thought that marshal might stop in. While I'm keeping tabs on everything, I might as well plant a bug on that Raynor's ship, too.

"Mental note: Be sure to check the passenger manifests of all the incoming freighters that have landed at the south docking bays for the past week. I'll have to keep a bead on the control tower, too... see if there's any mention of a Hyperion. Broker's damn picky about what he wants catalogued." 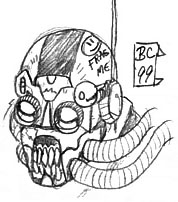 "Third sandstorm in two days. Wind's kickin' up a lotta dust. You know, I have half a mind to drop in on Quatto and give him the shits. I need a new transdater coupling. The one in my headlink's starting to act up.

"I swear if I get any more damn sand in my implants, I'm going to paint that sniveling little bastard with so many red dots his grandkids are gonna have nightmares. You know, I almost feel like ripping that smug little grin right off his face, along with that cybernetic eye and the rest of his right side. Cocky little swindler needs to realize he ain't in some podunk backwater outpost any more. He's in the big leagues now. Little man needs to watch his six. I bet if Ro'taann actually asked him to build him a bomb, the damn idiot would probably sell him a shoddy bomb casing full of used spinball machine parts.

"Speaking of spinball machines, I might actually want to check his junk shop for one. See if he's got any U238's lyin' around, too. Backup rifle's all out. Blew all my ammo yesterday when those thugs wanted to frag him for that fake Khaydarin core he dumped on 'em. They were bigger idiots than Quatto for actually believing a little worm like him could get his grimy mitts on Protoss technology. Oh well. At least they made a nice-looking crater in front of his shop.

"I still can't figure out how he got his hands on that battlecruiser he's got in the junkyard. I didn't even know he had requisitioned that much storage space, let alone the permits to keep property like that—even if it's junk property. The damn thing probably can't even stay in the air, much less pack a wallop. He'll probably end up dumping it on an easy mark for an obscene purse. As long as Customs don't stick their nose in it and slap a tariff on it, I ain't sayin' a thing."