Another Day, Another Dollar, Chapter III

"I helped Kaiyrnyn drag the last of the villagers outta Wilco's after I finished with the transports. The freighter crews must have really been tanked 'cause we knocked over quite a few chairs in tryin' to get the highlanders to their feet, and the pilots never even stopped snoring. Ah, the power of beer. 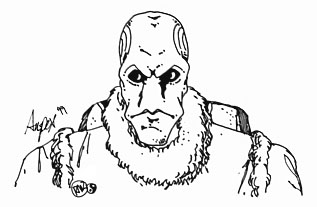 "Kaiyrnyn tells me there's an outpost off to the north, about halfway between Bora Dalis and the nearest highland settlement. We could probably set these people down there and they'd be fine until they could send a transmission to be picked up. Apparently the place has been abandoned for quite some time, so the pirates probably wouldn't get a fix on 'em too quickly. Give 'em a fighting chance... or something. Kaiyrnyn wants to go with them. About time for his weekly prospecting run, anyway.

"I'm stocking 'em up with some Gauss rifles, some grenades... managed to get 'em a couple of working hoverbikes, but that's about all I can do without denting my own wallet. For what it's worth, I actually hope they get some help. Pirates are eating up quite a bit of trade traffic in that northern airspace, and Ro'taann keeps bitching. Hmm... maybe Quatto's got some extra flares I can give 'em."

"I think I'm gonna call it a night. Gotta make a run early tomorrow morning at the crack'a dawn and my pack's gotta recharge. Northwest sector's pretty calm tonight anyway, so I should be able to sleep pretty well. Bikers are actually stayin' in tonight, from what it sounds like out there.

"Xenon gave me his word of honor he'd look into putting in a new tap in the control tower. He's so full of bullshit it's choking him. But we're all here to play our little games, I suppose, so I could care less until tomorrow when I've had some sleep and some food in my stomach. All else fails, I'll get Quatto to give me the parts and I'll do the job myself.

"Oh, shit—mental note: Switch the DNA sample from the portable unit to the black freezer tomorrow. Cryo-can's batteries are probably dying by now. One more piece'a crap for Quatto to pretend to fix for me. If this sample gets spoiled, Broker's gonna have my ass. Not the most patient guy in the world. You know, I really wouldn't want to have to put a dot between his eyes if I could at all avoid it...

"I'd better switch the damn sample now. Save myself a bullet in the canister. C-10's are a bitch to find around here sometimes.

"...Aw, dammit. I wish that stupid dog would quit howling."