I added support for Warcraft III replays to the file info pages using this this Warcraft III replay parsing library. It'll now show basic information about the game (such as the map and the players) along with the chat. Here's every replay on the site, but this is the only one you need.

Surprisingly, I couldn't find a PHP library for parsing Brood War replays—continued interest in the game seems to have led to such things being written in cooler programming languages—but there are only a few of them on the site (and they're less interesting since they didn't log chat).

She's a river between day and night

Magic's The Star Alliance died a little while ago—and by "a little while ago," I mean "the hosting got yanked a year ago but it was basically dead for seven or so years before that and here's a Campaign Creations thread about it where I proffer a bunch of unsolicited advice." Anyway, they did a design contest a long time ago. I made this entry in March 2005, and here it is today on the 50th anniversary of the moon landing:

I can't remember if I ever submitted it or showed it to anybody. The funny thing is, to this day, I'm not sure if I like it or not. Well, there are things I like about it, but I'm not sure I like it as a whole.

Of course, they later changed their name to Samods, which was supposed to convey "modding" but mostly sounded like a functional programming concept.

At any rate, they adopted what would become their final design in 2007. I think it may have been designed by dine, but I can't remember exactly (I remember that he made a nice site for Project TPC way back when and that he was involved in some capacity with the Star Alliance, since he got me and phal the hosting for The East-West Coalition web site). I do like that design, regardless of who made it, though I'm not crazy about three-column layouts and always thought it would've looked a lot better with a complementary color. But I did a bunch of excessively monochromatic color schemes as well, including another Star Alliance–related redesign, this one from a couple of years earlier in December 2002: 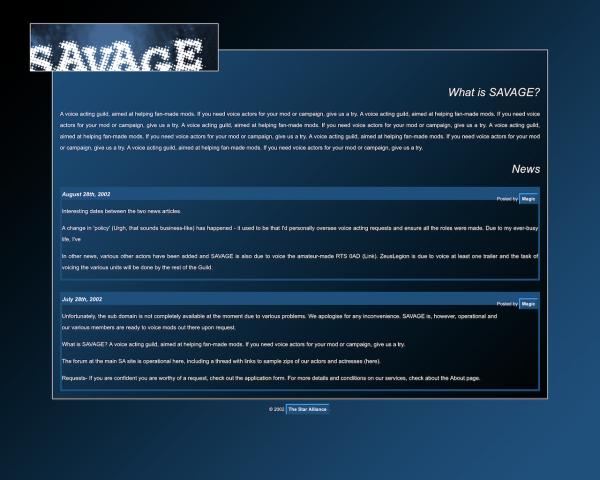 This one was again made at Magic's behest, but I never finished it; it's notably lacking navigation links. The post author doesn't quite float properly anymore (flexbox would be nice), and the gradient images aren't big enough for modern displays (CSS gradients would be nice). And the halftone effect in the title image is a bit jarring against the smooth gradients of the rest of it. I like it, though, and think it would've worked well if I had completed it (and made better color choices).

My latest sun is sinking fast

Some time ago (I think 2013), I started archiving old community web sites, hosting them here, and putting them on the Links page. The process for this was mostly using wget to download the entire site from the original host if still available or, more commonly, from the Wayback Machine and then doing some regex find-and-replace voodoo to remove any boilerplate markup added by such sites (ads and such). This can be a bit hit-or-miss, with some sites coming out more-or-less complete (such as Seawolf's Spec Ops site, which I think is only missing a single image on its "Links" page) and some missing quite a few things (such as Mike Lemmer's Scantid Studios web site, which is missing several pages and many images). But either way, the result is better than nothing, and I've built up a nice archive of a fun time when everyone made a web site for some reason.

Of course, if it's one of my own sites, I can just upload it from my computer and call it a day. Some of these have aged fairly well, such as the Alternate Reality and Antioch Wars sites. Some of them are this one that I dug up a few days ago: 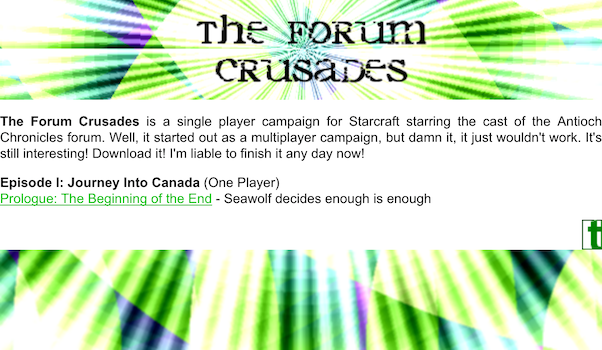 I made it in November 2001 for a campaign that (unsurprisingly) I never finished. One old web site that looks like Photoshop filter vomit in retrospect isn't so bad, really. I replayed the one completed mission (cartooned), and it's not awful. I'm not sure why it was so hard to finish a Starcraft campaign back in the day (they seem so simple in retrospect), but I guess I wanted to make a whole bunch of web sites instead.

I got the old forum working again. The last time I had it working (which was a good while ago), I simply took the last good database dump I had and imported it into a new MySQL database. I think it stopped working because Avatar switched to a different hosting provider.

This time, I moved everything over to an SQLite database instead, which I consider more resilient for this purpose since the whole thing is one file that's easily moved around or backed up. It was a mostly straightforward process, though I had to change some of the SQL statements (since SQLite does some things differently from MySQL) and write an SQLite abstraction class for phpBB 2 (since that version never supported it). I also had to replace or update some deprecated functions to get phpBB 2 to run properly under PHP 7.1 (which my test server runs) and PHP 5.4 (which this server runs).

In an attempt to minimize broken images, I also did a replace for http://(www.)antiochforever.com/ to https://antioch.snow-fall.com/ in the post text, private message text, user avatar, and user signature fields. Of course, there are still a fair few broken ImageShack links and such, but there's nothing that can be done about that. All reading functionality seems to work (including reading threads, private messages, and user profiles and searching), but I haven't tested things like posting, replying, or voting in polls because that's silly.

The forum was "pruned" regularly (meaning the oldest posts were regularly deleted), so this represents a snapshot of the community in an arbitrary slice of time, but it's interesting nonetheless (and often pretty funny in retrospect) and a fascinating historical document of what people used to talk about on the internet before Marvel movies and Donald Trump.

And a needle so fine

This is the first default design since the first not to use phal's icon set for the site (or a derivative thereof), which is a bit unfortunate.

As always, the site design can be switched on the Preferences page.