The real-life meeting of the Antiochers that we've been talking about for forever and two days.

We're aiming for sometime in 2008 or 2009. This will give people plenty of time to work out the logistics (clear away the time, work out the transportation, arrange the festivities, etc.).

Seawolf has suggested a weekend in summer 2008 or 2009, so there'll be minimal conflicts with folks still in school:

typhoon has suggested October 24th, since it marks the tenth anniversary of the forum and conveniently falls on a weekend (people can use the 23rd and 25th for travel):

Some place in the U.S.A. since that's where most of us are, I think. Here's our great big country (with interstates highlighted in crazy colors): 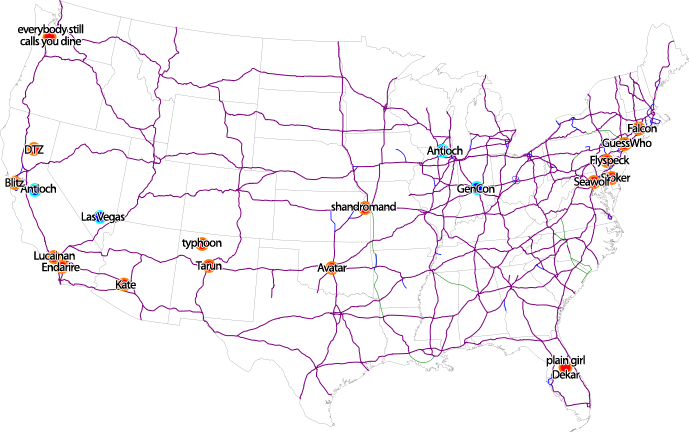 Furriners who can manage the travel are welcome too.

Seawolf suggested a bunch of real-life Antiochs (there are apparently four in the States; we'll omit the Ohio and Tennessee ones because nobody cares). Codebreaker suggested Las Vegas.

Folks have also suggested meeting up at various conventions, like GenCon or PAX.

Hey, everybody sign your name here if you're down for this.

Maybe, depending on the details.